“Islam is also being heralded as co-equal with Christianity by notable Christian leaders… everyone from Brian Mclaren to Rick Warren are on board with a thing called “Chrislam,” because after all, they say, we all worship the same god.”

from this disturbing article https://barbwire.com/2018/05/27/radicalized-christians/

In the naiveté of my youth I also believed that Christians, Jews, & Muslims all worshipped the same God.  But I no longer believe that “Allah” that Muslims worship & fear is synonymous with The Lord God of Christians & Jews (Elohim, Yahweh, YHWH, Adonai, etc).  The attributes of “Allah” are not compatible with the scriptural descriptions of God’s nature & character.  Though many (most?) Jews do not yet recognize Jesus as their Messaiah many in recent days have come to do so.  There is a local Messaianic Jewish congregation in Metro Detroit, called Shema Ysrael, that conducts some interesting outreach programs, including Seder, to share Jewish traditions with Christians & increase our understanding of much of the meaning & symbolism of that traditional observance.  The Rabbis from Shema truly seemed to gave grasped the best of both worlds, the Jewish traditions & history & the “fullness” of understanding Jesus to be their Messaiah, & ours!

When seeing the word “Chrislam” I was immediately reminded of C. S. Lewis’ allegorical representation in the final Chronicle of Narnia, The Last Battle, where the end times deception is so great that God (Aslan) is equated with the devil (Tash)…resulting in a fake deity “Tashlan”.  It is to our sorrow & shame that so-called leaders of the faith today would promote such similarly radical & false doctrines & deceptions!

below from this site: http://narnia.wikia.com/wiki/Tash

By the twenty-sixth century, many Calormenes disbelieved Tash’s existence. Together with Shift the scheming ape, Ginger the duplicitous cat and other treacherous Narnians, they concocted a story that Aslan and Tash were the same person, known as Tashlan. They disguised innocent Puzzle the donkey in a lion’s skin and kept him in a stable. Many Narnians and even all of the Calormenes that accompanied Rishda Tarkaan saw this as ridiculous, given Aslan’s and Tash’s antithetical natures, but were powerless to speak up against Rishda Tarkaan and Shift 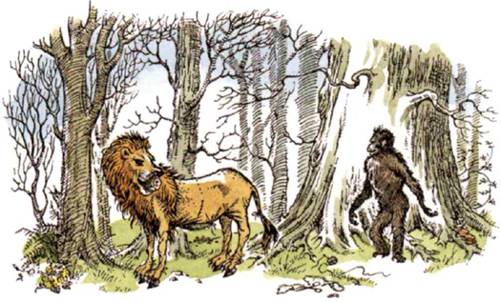 Puzzle the donkey dressed up as “Aslan” by the evil ape

It is suggested in the book that Tash is opposed to Aslan: by implication, he is Satan in his Narnian form, just as Aslan is Jesus Christ in Narnia. This is illustrated by the reactions of the main characters to his presence: they talk of smelling a foul smell and of the air growing cold when he passes near to them. ‘Tash’ and ‘Aslan’ are respectively the Turkish words for ‘stone’ and ‘lion’. The name Tash can also mean “disgrace” or “stain”. Equally telling is the false religion Shift created, not unlike the one certain interpretations of the Book of Revelations depict, which the Bible asserts will ultimately call the Anti-christ. With Lewis’ notion that Aslan was literally Jesus, it would be a fitting parallel.

Tash’s physical appearance may have been inspired by deities present in certain polytheistic religions. The bird head is reminiscent of the way some ancient Egyptian deities are represented and the extra arms are a staple of several deities in Hinduism, for example. Moreover, in some illustrations Tash is depicted wearing attire that seems to be inspired by Aztec culture, notably its feathered headdress, and the practice of live human sacrifice was likewise common in Aztec society.

Despite his similarities to earth deities, it must be understood that Tash is inferior to Aslan. Peter was able to banish Tash in Aslan’s name and it was Aslan, not Tash, who stood in front of the stable judging all of the Narnian creatures.

It should be noted that those Calormenes who did good in the name of Tash were really honouring Aslan: likewise those Narnians who do evil in Aslan’s name were in actuality serving Tash. This illustrates Lewis’ belief that faith is more defined by a person’s deeds and beliefs than by the name they honour. This is made clear in The Last Battle, where Emeth, an honest Calormene soldier, enters “Aslan’s Country”. In fact, the Calormene capital city has an existence in Aslan’s Country. I wrote a bit previously about Christians & Jews being One in the Lord here:

all images in this post are from various Bing.com searches…